skip to main | skip to sidebar

I am a terrible blogger. It may not really be my forte. Here's a brief summary of what I have been up to.

I am determined that one way or another 2011 will be the year Chuk Hell Productions starts making my hot sauce commercially available. Keeping fingers crossed.

I have been working part time on a film production which is something I have always wanted to do. Not only has it been a great learning experience, it actually pays. I even got to do a bit of acting. It should go live as a web series sometime in April. More details when that happens.

I got to make a stab at recording and producing a rock band, Valley of Fire ( check 'em out on Facebook) and loved doing it. I'm hopefully bringing in another band to The Four Winds Bar to record again very soon. This is another thing I have always wanted to do and it is a lot of fun.

I tried to get my garden ready to plant yesterday but was stymied by a large nest of fireants yesterday and a back pain flare-up today. Procrastination IS one of my best skills. This will be the 5th year that I have grown NAGA chiles, a.k.a. Ghost Peppers a.k.a. Bhut Jolokias. Love them little red devils.

OK, I have updated this blog. Someone notify the press!
Posted by Chuk Hell at 9:12 PM 1 comment: 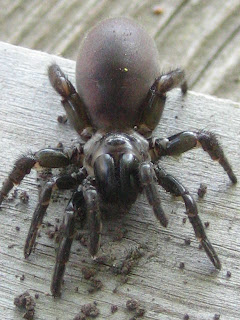 I posted some of my most recent sonic experiments on this groovy website I discovered called CLLCT. It's a great music site for the true DIY muscian and fans of experimental music. All music there is free to download. Check it out!

http://cllct.com/release/musesicki
Posted by Chuk Hell at 9:34 PM No comments:

OK, let's put this pie together and get it in the oven. Preheat your oven to 525º. 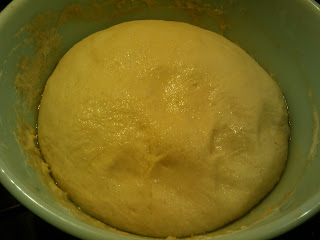 The dough has risen nicely and should be very flavorful!

OK, so the dough has risen and risen again and we have some nice chunky homemade pizza sauce. In the meantime we have prepared our toppings. What toppings? Well, whatever the hell you want. I'm kind of a traditionalist in that I like stuff like pepperoni, onions  olives and  maybe bell  peppers.  Really  though  be as creative as you want.  If  foi gras  and ahi tuna pizza sounds good to you, go for it! 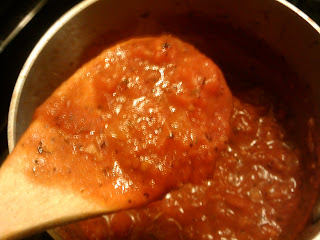 One of the best ways to make pizza is with a pizza stone. The "stone" retains lots of heat and bakes the crust nice and crispy. Unfortunately I don't have one.  I just use a pizza pan. I've had mine for as long as I can remember. you can see it's so well seasoned it's almost black. What I have done here is spray it with some release spray and sprinkle it with some corn meal. Now I'm ready to spread the dough. 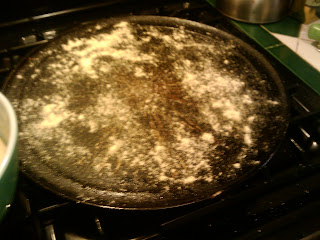 OK, since we made a wet, sticky dough for a crispy crust, slapping it out or tossing it is out of the question. Just dump that dough on the pizza pan and spread it out with your finger tips. Try to keep the thickness even. If you tear a hole in it, don't worry, just tear a piece of the edge and "patch" it. 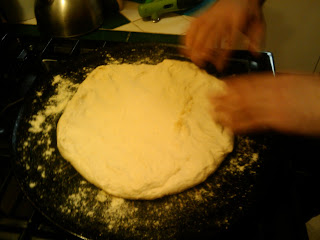 
Once you have the dough spread out evenly then are ready to add your sauce. Use the back of a spoon to spread it out evenly. 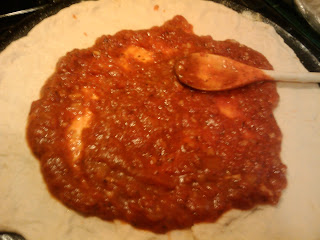 Once the sauce is spread out you are ready to top your pizza. First is cheese. What cheese? Once again, use any cheese you want to. I like good ol' shredded mozzarella. If you want to get fancy and add other cheeses try Parmesan, Romano, Pecorino, Asiago... etc. Yes, the Italian ones.

After  cheese add your meats, a little more cheese and veggies last. That way the veggies will cook and the moisture in them will evaporate and not make the pizza soggy. Things like onions, peppers and mushrooms should always go on top. 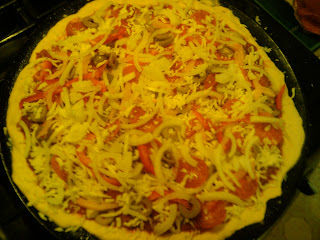 Topped and ready for the oven

In the meantime we have pre-heated the oven to 525º. Yes, crank that sucker up ALL THE WAY. Put the pizza in on the center rack. Bake for about 8 minutes. Since I don't have a pizza stone I have a trick for getting the crust nice and crispy. About 2/3 of the way through cooking grab the pan ( with good oven mits, of course!) and shake it a little. The pizza should slide around freely. Now just slide the pie off the pan and onto the center rack nad finish baking. When it's done slide it back onto the pan using a fork and take it out. 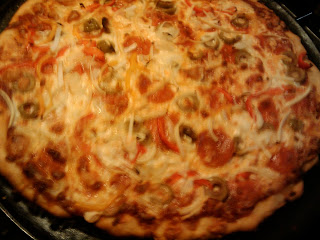 Let it cool a few minutes, slice and enjoy with a nice red wine or a good lager or ale. See? It's easy! Yes it takes some time but it's worth it. Too much trouble? well you can always call Pizza Slut!

Homemade Pizza from Scratch Part One

I've been making pizza at home for over 20 years. One of the best perks of learning the baking trade was knowing how to make bread dough. Pizza dough is pretty close to bread dough with a couple of differences. It's not hard to do if you have a grasp on the basics of baking.

The best tasting breads ( or pizza doughs) are the ones that take time to make. By allowing the dough to rise and be knocked down and rise again a lot of flavor develops from the carbon dioxide given off by the yeast. This is why sourdough breads taste so good. That sourness equals flavor.

I start with about a cup of luke-warm water and add about a teaspoon or so of instant yeast. By the way I never measure when I bake unless I'm writing down the recipe as I go so bear with me. Add a pinch of sugar and mix this up to activate the yeast. Sugar is like rocket fuel for yeast; it makes those little single cells very excited so they multiply rapidly. 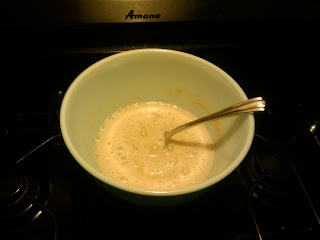 let's get this party started!

After about 10 minutes add about a cup or cup and a half of flour. You can use bread flour ( high gluten) or  what I have been using lately, "00" flour, which is very fine and makes an extra crispy crust. Stir this in and you have... a sponge! Sometimes bakers refer to sponges as a "biga". I think that's French or something. The French think they invented baking but they didn't. They did go a long way toward perfecting it though.  Set the sponge on a warm place like on top of your stove to let it rise. Keep an eye on it and don't let come out of the bowl. The sponge will burble and bubble like THE BLOB. It's also giving off lots of CO2 that will flavor the dough. If you have time let it go for 30-45 minutes. If you're in a hurry this is a way to "cheat" a bit and get some of that sour flavor. Add a dash or two of vinegar before you mix up the dough. But remember, that's cheating. This is a good time to open a beer. 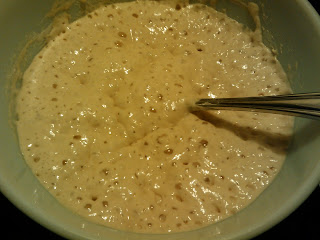 
Once your sponge has risen and been knocked down and risen again you're probably ready to actually mix up the dough. You'll need to add some salt... probably about a teaspoon. Salt is like a brake for yeast; it controls the growth. You also need it for taste. I also like to add some olive oil to my dough... probably about a 1/4-1/3 cup. You can use all flour if you want to but I like to use a 2/3 flour to 1/3 semolina mix. Instead of semolina some folks like to use cornmeal, which makes and especially crispy crust but I'm not crazy about the texture.

A few words about the relationship between liquid and flour. The wetter the dough, the crispier your crust is going to be. This means if you can manage to work with a wetter, stickier dough you will be rewarded with a great crispy crust. The more flour you add, the more "bread-like" the dough will be. Personally I like crispy.

I mix the dough together in a bowl with a fork. You can take it out and knead it a bit by hand if you want, but I wouldn't knead it too much. You don't want to develop a whole lot of gluten; it's a pizza dough not a loaf of bread so take it easy on the kneading. 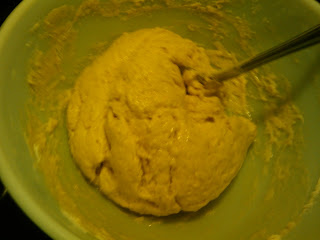 the dough is coming together

Once you have your dough mixed, coat it with a bit of olive oil, being sure to have oil underneath it in the bowl so you can get it out when it's  ready. Cover the bowl with a dishrag and the waiting begins again. Remember: the longer you spend letting the dough rise and rise again the better the crust will taste.  So relax, open a beer and let that sucker rise.

In the meantime, you may want to start thinking about the sauce.  Use whatever sauce you like. Some people use pesto. Some people use Alfredo sauce. Some folks just use olive oil. I like a traditional marinara style sauce that is pretty easy to make from scratch. If you want to save time you can use any canned pasta sauce or even canned pizza sauce.


For my sauce I just saute'  some onions in olive oil, add some Italian dried herbs  ( oregano,  rosemary, thyme) some fresh chopped garlic and a can of either tomato sauce or diced tomatoes and let it simmer while the dough rises. You may want to knock that dough down again, form it into a ball and let it rise again.


In the next post we'll put this pizza together, bake it and eat it!

I had heard of bacon grease cookies for a while. I think they might be a depression era-type recipe so when I got my hands on a surplus of unsliced bacon I decided to give it a try. I did not end up with as much rendered bacon fat as I thought I would so I used half butter/half bacon fat. 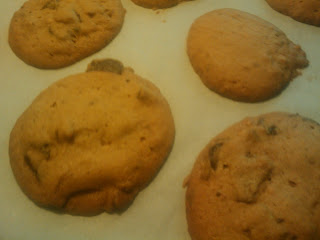 I thought these cookies were pretty good. Your mileage may vary  but if you enjoy bacon and sweet and savory together you may enjoy these too.